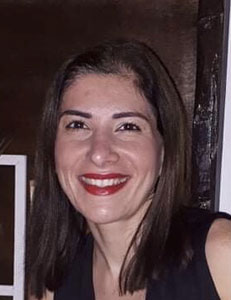 Dr Karolina Lambrou is a visiting lecturer at the Theological School of the Church of Cyprus, where she teaches English for Theology to undergraduate students. She also works as an English teacher at the State Institutes of Further Education. She has worked in the publishing industry for many years, in Cyprus and the U.K. She has presented her work in numerous international conferences and publications.

PhD in English Literature and Comparative Studies, University of Cyprus, 2020

MA in English Literature and Comparative Studies, University of Cyprus, 2012

Political Philosophy: The concept of (political) society in the work of Giorgio Agamben, Emmanuel Levinas and Judith Butler

Psychoanalysis: Theory of abjection in the work of Julia Kristeva, the notion of perversion in Jacques Lacan

Postmodern Art: Theories of violence in relation to Performance art

“The Turn to Ritual: The Viennese Actionists’ Performative Violence”, in Expressions of Religion: Ethnography, Performance and the Senses. Lit-Verlag, Berlin:2019

“The Traumatized Body of the Performance Artist: Marina Abramovic and Franko B,” in Fear, Horror, Terror. Interdisciplinary.Net, Oxford: 2016.

“Fighting for our Common Vulnerability: The work of Marina Abramovic and Franko B,” in Revisiting Sexualities in the 21st Century. Cambridge Scholars Publishing, Cambridge: 2014.