Reflections on the Establishment of the School

The first attempt in modern times to establish a School that offered Greek, Theological and Musical education occurred as part of the reforming initiatives of Archbishop Philotheos (1734-1759). His enlightened efforts, (a bright passage in the history of the Church of Cyprus), met with obstacles in the form of unfair slander and envy, even from members of the clergy. Almost a hundred years later, the systematic growth in documentation and the attendant increased need for literacy within the church in the mid-nineteenth century and the demands of the times, intensified the need for the establishment and operation of such a school in Cyprus. Archbishop Cyrillus 1(1849-1854), at the suggestion of the then Russian consul in Beirut, decided to establish a Theological School, and in 1853 applied to the Director of the Theological School in Halki for assistance. However, another hundred years would pass before the establishment of a Theological School in 1949. It is recorded in Codex II of the Schools of Nicosia that the bishops of Paphos and Kyrenia, Neophytos (9 July 1869) and Meletios (20 January 1872), on being promoted to their respective seats, allocated significant funds for the schools of the capital with the request that a place for instruction of Theology and the education of the priesthood be provided for. The attention of the Church, however, focused on the more pressing need to promote primary education on an island-wide basis, and secondary education in Nicosia and the large urban centres.

In the period of British rule in Cyprus, difficult years for the Church during which the heroic Bishop of Paphos was persecuted, Archbishop Makarios II, with the support of Kykkos Monastery, founded the Theological School “Apostolos Varnavas”. During its first years of operation this historic school, in addition to serving the Church of Cyprus, was a breeding-ground for members of the Church who would subsequently play an important part in fulfilling the needs and desires of the Cypriot people. Furthermore, on a nearby site, Archbishop Makarios III envisioned a Theological school to be established in the area between the Kykkos Foundation and the Theological School “Apostolos Varnavas”. The catastrophic events of 1974 put an end to these plans.

The foundation of the Theological School of the Church of Cyprus in 2015 by His Beatitude Archbishop of Cyprus Chrysostomos II, (as representative of the Church in relation to the State of Cyprus), is indeed an important and historic undertaking which we pray will continue to grow, develop and bear fruit for the benefit of the Church and society in general.

The basic principles and tenets pertaining to the foundation of the Theological School were and are that the School:

The most certain course for the attainment of the aforementioned principles was for the establishment of the Theological School to occur subject to the legislation for Private Institutions of Higher Education. Within this framework the Church of Cyprus would be able to achieve not only the establishment of a balanced four-year undergraduate program in Theological Studies, but also maintain the ecclesiastical, ethical character of the school. In addition, the Theological School of the Church of Cyprus could develop on the basis of two principles derived from the above.

The Theological School of the Church of Cyprus was founded as a Private School of Higher Education, according to existing legislation, with the approval of the Minister of Education and Cultural Affairs (under the authority granted to him by law) and was registered in the P.I.T.E records of the C.M.E.C of Cyprus, on the 19th of June 2015, with the registration number: M.E. & C. 7.14.10.37.

The Registration Certificate at the Registry of Private Institutions of Tertiary Education was issued on the 22nd of June 2015. The relevant disclosure was published in the Official gazette of the Republic on the 26th of June 2016 with the R.A.A 221/2015.

The Accreditation of the Study Program was approved at the 17th Conference of The Cyprus Agency of Quality Assurance and Accreditation in Higher Education and certified on the 3rd and 4th of April 2017 with its “Final Report”, Folder No. 7.14.248.001/1 ( Article 400.2) dated 6th of April 2017, of which the School was duly notified.

The four-year Undergraduate Study Program “Theology (4 years/ 240 ECTS, Degree)” has been entered in the Register of Educationally Validated and Certified Study Programs P.I.T.E, with effect from the Winter Semester of the Academic year 2015-2016, for five years. The relevant Disclosure with the number 000060 and dated 29th of June 2018 is viewable here: 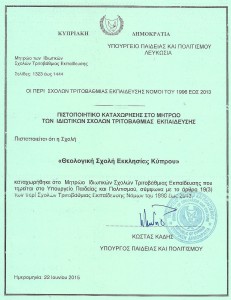 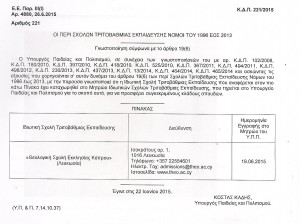 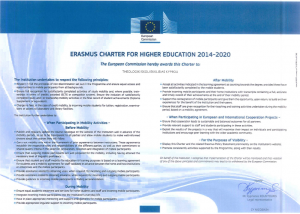 The Erasmus Charter of CCTS 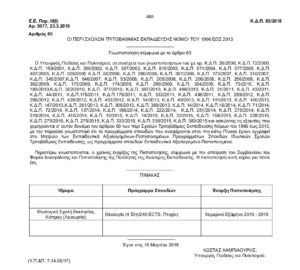 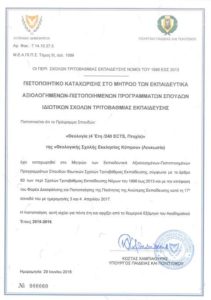