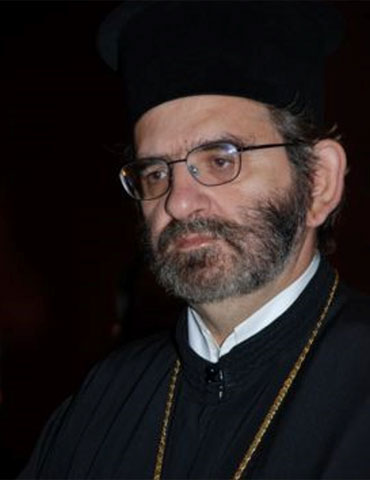 He is currently a Professor of Theology at the University of Athens. Completing his undergraduate studies in law, philology, and theology at the University of Athens, he pursued graduate studies in theology in France and Germany, obtained a master’s degree from the University of Strasbourg (France), and earned a Ph.D. from the University of Freiburg (Germany). Moreover, he obtained a second Ph.D. from the University of Thessaloniki (Greece) under the direction of Metropolitan Prof. Panteleimon (Rodopoulos) of Tiroloi. His Eminence is fluent in German, French, Italian, Spanish, Russian and English, in addition to his mother tongue, Modem Greek. He also possesses an advanced mastery of Ancient Greek and Latin. The Holy and Sacred Synod of the Ecumenical Patriarchate elected him as Bishop of Abydos on the 7th of February 2008, and he was consecrated to the episcopacy on the 23rd of February 2008 at the Holy Patriarchal Church of Saint George, at the Phanar (Istanbul, Turkey). On the 16th of February 2021, the Holy Sacred Synod of the Ecumenical Patriarchate elected him as Metropolitan of Krini and was appointed Patriarchal Exarch of Malta. He is a tenured professor of theology at the University of Athens, where he holds a full- time academic chair. Additionally, he served as Dean of the Department of Social Theology from 2007-2009 and 2020-2022. Also he is Rector of the Institut d’études supérieures en théologie orthodoxe in Chambésy/Geneva. As of 2017, he is President Emeritus of the Society for the Law of Eastern Churches after serving as its president for the better part of a decade. As an international academic authority, he has written several books and articles related to his research. His Eminence Metropolitan Kyrillos of Krini, Patriarchal Exarch of Malta, was appointed as Orthodox Co-Chair of the Joint International Commission on Theological Dialogue between Orthodox and Lutherans.