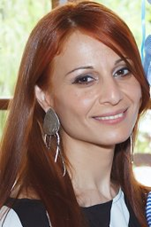 Dr Maria Pavlou is Lecturer of Ancient Greek Language and Literature at the Theological School of the Church of Cyprus. She teaches at the Undergraduate Programme of Theology and is also responsible for the School’s Public Relations and Quality Assurance. Dr Pavlou read Classics at the Aristotle University of Thessaloniki (BA, 1997-2002) and Leeds University (MA, 2003). She received her PhD from the University of Bristol, UK (2003-2007) with a thesis titled “Time in Pindar”. She has recently received an MSc in Digital Education from the University of Edinburgh (2018). From 2005 onwards she worked as a Teaching Fellow / Adjunct Lecturer at the University of Bristol (2005-2009), the University of Cyprus (2014-2018), and the Open University of Cyprus (2010-2013 & 2018), and was involved in a number of research projects at the University of Cyprus (2010-2011) and the Open University of Cyprus (2012-2015). She has also been awarded several scholarships: Center for Hellenic Studies (Harvard University), Μargo Tytus Summer Fellow (University of Cincinnati), National Scholarship Foundation of Greece (IKY), A. G. Leventis Foundation, Αrts and Humanities Research Council (U.K.), Fondation Hardt (Geneva), J. Costopoulos Foundation. She has published several articles in peer-reviewed journals and collective volumes and is the co-editor (with Prof. Vayos Liapis and Prof. Antonis Petrides) of Debating with the Eumenides (Cambridge Scholars 2018). Currently she is co-editing (with Prof. Antonis Tsakmakis and Dr Eleni Kaklamanou) the collective volume Framing the Dialogues: How to Read Openings and Closures in Plato, to be published by Brill in 2019.

Reception Studies: Reception of the ancient Greek literature and theatre in Modern Greece and Byzantium.

New Technologies and Education: Digital education and theoretical issues concerning the use of new technologies in teaching and learning.

“Attributive Discourse in the Speeches of Thucydides”, in A. Tsakmakis και M. Tamiolaki (eds.), Thucydides: Between Historical Research and Literary Representation, Trends in Classics, Berlin (2013) 409-434.

“Pindar and the Past”, in Ηistory Without Historians: Greeks and their Past in the Archaic and Classical Ages, J. Marincola (ed.), Edinburgh University Press (2012) 144-169.